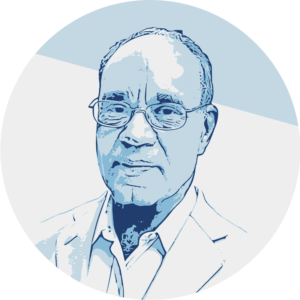 Harold P. Freeman, M.D. is Founder and President of the Harold P. Freeman Patient Navigation Institute in New York City. He is Professor of Surgery Emeritus, Columbia University College of Physicians and Surgeons.

Dr. Freeman is Founder and Chairman Emeritus of the Ralph Lauren Center for Cancer Care and Prevention and Founder of the Breast Examination Center of Harlem. Both are programs of Memorial Sloan-Kettering Cancer Center. Dr. Freeman is a past Associate Director of the National Cancer Institute and was the first Director of the National Cancer Institute Center to Reduce Cancer Health Disparities.

Dr. Freeman pioneered the Patient Navigation concept and model which addresses disparities in access to timely diagnosis and treatment, particularly among poor and uninsured people. Based on this model the Patient Navigator and Chronic Disease Prevention Act was signed into law by President Bush in 2005. In 2015 the Commission on Cancer of the American College of Surgeons Commission on Cancer mandated that patient navigation is a standard of care required for cancer center approval.

Dr. Freeman served as Chairman of the United States President’s Panel for an eleven year period having been appointed by Presidents Bush and Clinton. Dr Freeman is a Lasker Laureate. He received the Lasker Award for Public Service in 2000 for “enlightening scientists and the public about the relationship between race, poverty and cancer”.

Dr Freeman was named a “Giant of Cancer Care” in 2015 by OncLive. In 2017 Dr Freeman received the Cura Personalis Award at Georgetown University. This is Georgetown University Medical Center’s highest honor. The award recognizes a health professional who has made “outstanding contributions to human health guided by compassion and service”.